He was once rated by the American media as: The old man who contributed the most to the American society that year, Liang Dongcai was two years older than Cheng Man-Ching, and once served as the customs director of the Ministry of Finance. He laughed at himself for not paying attention to health in his early years. , But his five is definitely not the so-called poetry, calligraphy, painting, boxing doctor, but “drinking, smoking, drug, gambling.” Because of this, he was seriously ill. The doctor said that it should only be two months before he would learn Tai Chi and he recovered his health.

Liang Dongcai later promoted the 150-style Tai Chi Changquan, including 37-style omitting moves. He also referred to Sanshou (from Xiong Yanghe) pair training as a duo dance with music, but he also said that if you separate the “Hua Na Da” , That’s dance, yes, but if the three can be integrated, it can knock people down or knock out.

He has also learned mantis boxing. He has many Taijiquan teachers, but Zheng Manqing is the most respected. He is currently the oldest (103 years old) of Zheng’s disciples and Wang Jian, who has served as the chief prosecutor. Qishou today. He also learned Qigong and Baduanjin with the well-known General Yang Sen.

Pushing hands must first learn to suffer losses and gains. The body is like a willow tree. Even if pushed hard, the body still has to soften. Zheng Manqing said that the importance of strokes accounts for almost half of the push hands. Next comes the counterattack. The counterattack cannot be doubled. It is necessary to find the yin and yang of the opponent, to experience gravity, to find a straight line, and to be able to concentrate. Before fighting back, you must relax your whole body. In the Yang family, if he feels his arm is caught, he will immediately strike the opponent with lightning. Zheng Manqing knows 26 angles and directions of sending people. Liang Dongcai said that he probably knows 11 or 12.

Zheng Manqing once tried to infuse tofu with chopsticks all over his body, and then eat tofu. Zheng Manqing said that if the tofu is sour, it means that the gas has been poured in.

He has written ten important experiences in life, here is a part of it: I should learn to give in, don’t attack people, small losses are small gains, big losses are big gains, don’t take advantage of others, the more I can give, the more abundant I will be. . Do what you say, hide evil and promote good. 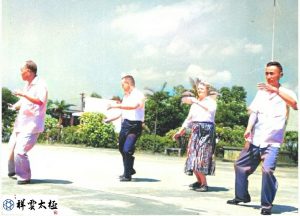