(Chinese Boxing Champion and first Taichi Boxer in the world)

Known as the Three Wonders. He was the first full-time newspaper photojournalist in China. He was awarded the “Master of Art in Swiss International Photography” and was one of the few war reporters who was born and died during the War of Resistance against Japan. Both of his Chinese and Western paintings have profound knowledge and are widely collected, especially the sketches of characters. He was once praised by masters such as Lang Jingshan, Liu Haili, Cheng Man Ching( Prof CMC ), Huang Junbi, and Zeng Xubai.

He studied praying mantis and Shaolin from Luo Guangyu in the early days, practicing iron sand palm and iron fist skills. He was once the champion of Chinese boxing competition and was known as the lightning striker. In the 1930s, Prof CMC served as the head of the Chinese Art Department of Shanghai University. Guo Qinfang was taught by him. Ten years later, during the Sino-Japanese War, the lightweight Guo Qinfang participated in a leapfrog challenge boxing match. His competitor Jiang fouled him. Prof CMC was impressed by Guo’s demeanor and technique, so he indirectly asked him if he was injured and invited him to dinner. Later, he became a student of Prof CMC , but he did not fully apply the style of Tai Chi, but applied the principles of Tai Chi to boxing.

Once in Chongqing, Prof CMC told him that he would take him to see a strange martial artist (Wang Xiuai). As soon as he entered the door and saw a coolie answer the door, Prof CMC asked him to stand in front of the coolie. Coolie held his hand and smiled, and Guo fell to the ground. Guo immediately got up, clenched his fists and prepared to fight, but the coolie immediately appeared behind Guo Qinfang’s body in a trance. The three of them drank some tea and left. Prof CMC laughed and Guo Qinfang was fascinated and full of confusion. There was another time in Chongqing when Guo was queuing up and the opponent jumped in. Guo said a few words, and the opponent punched him. Guo dodged and injured him with a punch. The man reported to Guo for damages for compensation. Prof CMC helped Guo pay the fine, and volunteered to heal the man. Prof CMC told him that you were playing the Chinese boxing champion. Fortunately, he only used 50% of his skills.

Guo had a positive view of Le Huanzhi, who was well-known for his volleying power at the time, but Prof CMC was at odds with him, so Bob Smith commented on the difference between the two people’s perspectives that Guo was looking up, while Prof CMC It is looking down.

In Prof CMC ‘s film, there is a gentleman who makes people beat his stomach, but he can’t cut Prof CMC ‘s arm. He once challenged Guo to knock each other’s arms and high-five, but because Guo had practiced some iron sand palms and qigong, the opponent was defeated. Guo said that Prof CMC is always willing to learn from people with superb skills, and is also willing to teach those who are inferior. He once saw Prof CMC practicing making multiple layers of tofu. The upper layer of tofu had no effect, but the lower layer was rotten. Prof CMC practiced acupuncture for a while and asked Guo to play with him. Guo said that you have to wear gloves because he thinks Prof CMC has learned acupuncture, but he did not learn how to solve acupuncture. He once mentioned that Prof CMC saw an advertisement in the newspaper claiming that Kung Fu was superb and invincible, so Prof CMC asked him to try it out, but the person was bloody.

When he and Prof CMC were learning boxing, he also instructed his younger brothers Chen Zhicheng(William C C chen), Huang Xingxian and others in boxing techniques.

Guo Jiaoquan first teaches to avoid or separate the opponent’s punches and protect the head. He has practiced anti-beating, and other parts can be beaten by people, but the head is absolutely to avoid being hit, especially the eyes. His enlightenment boxing teacher Chen Hanqiang (the earliest boxing coach in China) had his ears crooked.

He encouraged to practice some anti-slaps, using utensils to pat his body from light to heavy. But he didn’t practice halfway through the iron sand palm, because he found that when he was holding a brush, he seemed to be holding a nail, which had a lot of influence on his touch. (Note: I also heard from Teacher Wang Jie that he had practiced iron sand palm but he did not practice it because of his eye injury).

He listed some essentials for Sanda(free style) practice, such as being loose, not double, not moving first and while people moving a little, we are fighting on behalf of others, circuitous footwork, enticing the enemy to go deep into anti-siege, etc…

He has helped a handful of Tai Chi masters portraits, including Cheng Man Ching and Tao Ping Siang. 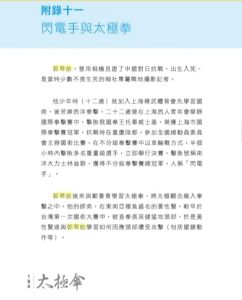 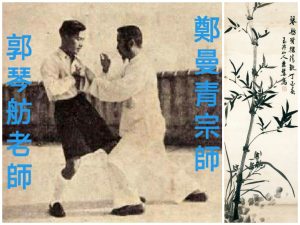 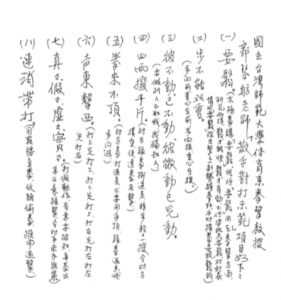 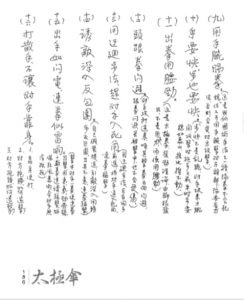 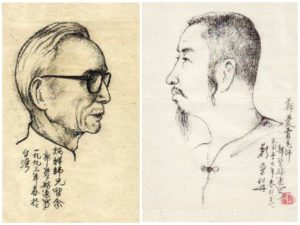 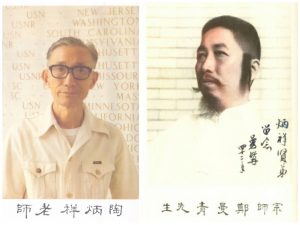 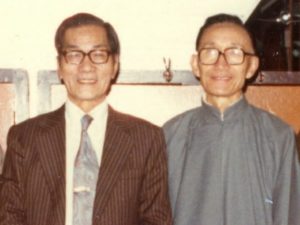